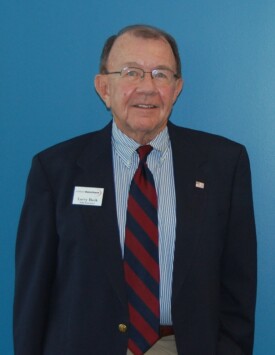 Larry Buck is Fleet Manager and Commercial Vehicle Account Manager at Kraft Nissan.  He graduated from Penn State University with a BS in Sales and Marketing and was a member of Phi Gamma Delta Fraternity.  After graduation, he was commissioned an officer in the United States Navy where he served on destroyers for three and a half years.  Having been a resident of Tallahassee since 1992, he has served on the Board of the Tallahassee Quarterback Club, as an original Trustee and Secretary of the Tallahassee Quarterback Club Foundation (the Biletnikoff Award), the American Cancer Society Board and was twice Board Chairman,  the Tallahassee Memorial Hospital Cancer Center Advisory Board, the TMH Foundation Steering Committee for  TMH Cancer Center fund raising  and, has been a fund raiser and active supporter of the Florida State University  Seminole Boosters for many years.    Larry is married to Ingrid Buck, a graduate of Florida State University and a retired elementary school teacher who is currently consulting in the education field.