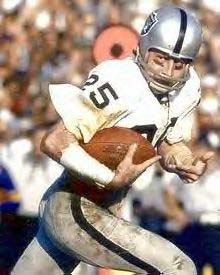 Fred Biletnikoff, a 6-1, 190-pounder with excellent hands and deceptive speed, caught 589 passes for 8,974 yards and 76 touchdowns during his 14-year career with the Oakland Raiders from 1965 through 1978. At the time of his retirement, Fred not only dominated the Raiders’ record book for pass receiving but he owned several significant NFL marks as well. Along with another Hall of Fame receiver, Raymond Berry, Fred held the record for having caught 40 or more passes in 10 consecutive seasons. His 70 receptions, 1,167 yards receiving and 10 touchdowns in 19 post-season games were also NFL post-season career records.

The talented pass-catcher came to the Raiders as their No. 2 draft pick in 1965. A 1964 All-America at Florida State, Biletnikoff caught four touchdown passes in his team’s Gator Bowl victory over Oklahoma. He also played in the College All-Star game before reporting to the Raiders’ training camp. Biletnikoff started as a special teams player and did not see action as a flanker until the seventh game of his rookie campaign.

When he did get a chance to start, he responded with a seven-catch, 118-yard performance and, in the process, became a regular for good. A durable, dependable performer, Biletnikoff missed only eight games because of injury in 14 seasons. Biletnikoff, a native of Erie, PA, reached the zenith of a career filled with outstanding achievements when he caught four passes for 79 yards to set up three Oakland scores in the Raiders’ 32-14 victory in Super Bowl XI. He was named the game’s Most Valuable Player.

Fred was an All-AFL pick in that league’s final 1969 season, earned All-Pro honors in 1972, and won All-AFC acclaim in 1970, 1972 and 1973. He played in two AFL All-Star games and four AFC-NFC Pro Bowl games as well as three AFL and five AFC championship games, plus Super Bowls II and XI.

The Tallahassee Quarterback Club Foundation is proud that Fred Biletnikoff’s name is identified with the prestigious national college football receiver’s award. A perusal of Biletnikoff’s accomplishment indicates why, to many, the name Biletnikoff is synonymous with the term receiver.

• Inducted into the Pro Football Hall of Fame on July 30, 1988
• Inducted into the National Football Foundation and College Football Hall of Fame in 1992
• Raiders’ all-time leading receiver with 589 career catches
• Ranked fourth on the NFL all-time receiving list at time of retirement
• Holds Raider career records for receiving yards (8,974), receiving touchdowns (76) and also caught 70 passes for 1,168 yards and 10 touchdowns in postseason games, ranking second on the all-time NFL list in each category
• Played in three AFL title games, five AFC championships, and Super Bowls II and XI (Most Valuable Player in XI)
• Shares NFL record of 10 consecutive seasons with 40 or more receptions (1967-76)
• Raiders leading receiver for six consecutive seasons (1968-73)
• Led entire NFL in receiving with 61 catches (1971)
• Led AFC in receiving with 58 catches (1972)
• All-AFL in 1969
• All-AFC in 1970, 1972, and 1973
• Played in two AFL All-Star games and four AFC-NFC Pro Bowls
• Played in 190 games in 14 seasons, missing just eight contests due to injuries
• Had 21 league games with 100 or more yards receiving
• Had four additional 100-yard receiving games in postseason play
• Never played in a losing season with the Raiders
• Originally selected in the second round of the 1965 AFL draft after a record-setting collegiate career at Florida State University