About the Biletnikoff Trophy & Ring

The Development and Design of the Biletnikoff Award Trophy,

the Most Beautiful in College Sports 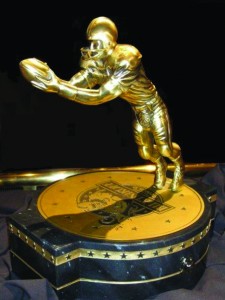 About The Biletnikoff Award Trophy

The Biletnikoff Award Trophy consists of a figure that is 18 inches high with an antique gold finish. The figure rests on a four-and-a-half-inch thick bronze metallic polished marble base that is twelve inches in diameter. The trophy weighs 56 pounds and is the largest and most beautiful of all the college football-position awards. Founding Trustee Rocky Bevis, over a period of one year, led a creative team of designers, metallurgists, and a world-renowned sculptor in developing the magnificent trophy. The Biletnikoff Award Trophy is displayed in the University Center Club, Doak Campbell Stadium, at Tallahassee, Florida. The trophy has won several national awards for design excellence. The trophy won the best trophy award at the Awards and Recognition Association’s International Award Market in 1998.

In  the January 2013 issue of the magazine, Lizeth George of Tallahassee Magazine  authored an article that featured the Biletnikoff Award.  Click here to read the article titled: “Celebrating the Catch: A heavyweight award with a Tallahassee connection.” 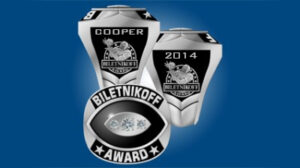 About The Biletnikoff Award Ring

Each year, the Biletnikoff Award recipient receives a spectacular trophy that is the most beautiful award trophy in college football.  The TQCF Board, led by Trustee Stephen Winn, developed the Biletnikoff Award ring, which is paired with the trophy and serves as the daily reminder of the athlete’s impressive achievements. This ring is given to the winner in recognition of his accomplishments as the best receiver in college football.

More recently, the TQCF designed and produced a Biletnikoff Award pendant.  The pendant was designed to mirror the styling of the Biletnikoff ring and allows the award recipient to present the pendant to a mother, sister, wife, or other female figure as a token of appreciation for her support.

What comes to mind when you think of football and Tallahassee? For most of us, the answer to that questions lies either in Florida State University’s Doak Campbell Stadium, where the Seminoles vie each year for a national title, or Bragg Stadium, where we rally ’round Florida A&M University’s Rattlers in their quest for success in the Mid-East Athletic Conference.

Since 1994, however, the Tallahassee Quarterback Club Foundation has sharpened the city’s football focus even more. As founder of the Biletnikoff Award, recognizing the top receiver in college football, the foundation has augmented and enhanced our standing in football circles around the country. Walter Manley, one of the driving forces behind the award, notes that the idea behind recognizing a receiver was nothing new when the foundation began its consideration.

“The Lou Groza people thought about it” before devoting their award to the nation’s premiere kicker, Manley says. Although there were awards for quarterbacks and running backs and the Heisman Trophy for the nation’s best player, a receivers award was conspicuously absent. “Lots of people considered this type of award,” Manley says, “but until we came along nobody did it.” …

To further demonstrate that the Biletnikoff Award is a national honor, not local or regional, Bevis notes that none of the voters is from Tallahassee. And any receiver from a Division 1-A school can win, he says, whether the player is a Gator, Hurricane or other Seminole opponent. Nor is the Biletnikoff necessarily awarded to a school noted for its passing game. “The first three recipients were from Penn State (Bobby Engram), Ohio State (Terry Glenn), and Wyoming (Marcus Harris), none of which is exactly a pass-happy school,” Bevis adds.

With namesake in place, foundation members turned to creating a trophy representing the ideal receiver. The Trophy Committee envisioned a player, arms outstretched, reaching to pull in a ball just slightly beyond his reach. Vaughn Mancha, former FSU coach and College Football Hall of Fame member, photographed ex-Seminole receiver Matt Frier in numerous positions reminiscent of Biletnikoff. Idea in place, the committee turned to Tallahassee Wildlife artist Jonathan Livingston. The proposal presented a unique challenge for the man who to that point had never sculpted anything.

“They asked to see my bronzes,” Livingston chuckles, “and I had to them I didn’t have any. As a wildlife artist, I hadn’t even painted that many people, but I assured them that they wouldn’t be disappointed.” After conversations with Biletnikoff and studying photographs from the player’s career at FSU, Livingston set to work.

“I’m a self-taught sculptor,” Livingston relates. “I read several books on anatomy and worked it (the sculpture) up from the muscle out. I had to rebuild the head and helmet three times because the proportions weren’t right.” The Trophy Committee had presented him with another daunting challenge: “They needed it done in 90 days”, Livingston says. “I told them I’d have it done in 89, and I did it in 89 on the mark.”

The finished product consists of an 18-inch-high figure resting on a half-inch bronze plate laser etched with the award logo. To accurately portray Biletnikoff, the player is dressed in a uniform and helmet from circa 1965. R.S. Owen & Co., the same Chicago foundry that crafts the academy awards, the Emmys, the Miss America Award, and the National Football League Most Valuable Player Award, bronzes the finished sculpture trophy in an antique-gold finish. The figure and plate sit atop a five-inch polished black marble base that is 12 inches in diameter and is added by Hugh Davis, former owner of Davis Trophies. At 56 pounds, the Biletnikoff Award is the largest trophy in college sports.

What does this all mean to the trophy’s namesake? “The best way to explain it,” according to Fred Biletnikoff, “is that you can get a lot of things in your life, a lot of honors, but seldom will you have something like this that’s nationally known (dedicated to you). It’s tough to explain. Nobody really knows the impact.”