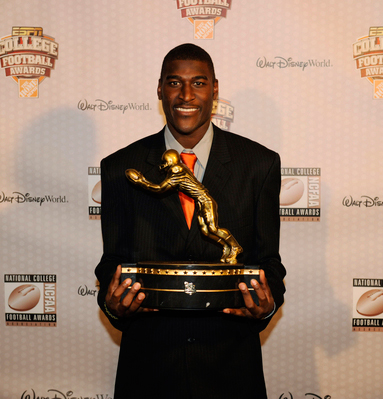 Justin Blackmon finished the 2011 regular season with 121 catches for 1,522 yards and 18 touchdowns. He led the Big 12 in receiving and ranked second nationally in both receptions per game and total receptions. His 15 touchdown catches led the league and represented the third-highest total in the nation. For the second consecutive year, he earned the title of unanimous All-American. Despite the extreme defensive game plans geared specifically at stopping him, he emerged as the 2011 Biletnikoff Award winner as the nation’s top receiver for the second consecutive season. He joined former Texas Tech receiver Michael Crabtree as the only players ever to win the Biletnikoff Award more than once.

Justin Blackmon announced at the 2012 Fiesta Bowl that he would declare for the NFL draft that year. He caught 8 passes for 186 yards and 3 touchdowns in the game.  He was also named the 2012 Fiesta Bowl offensive MVP.  He was drafted by the Jacksonville Jaguars with the fifth pick in the first round of the draft.  Jacksonville traded up with the Tampa Bay Buccaneers to draft him, exchanging their number seven selection and a fourth round pick for Tampa Bay’s spot. Justin Blackmon is the highest selected Oklahoma State Cowboy since Barry Sanders in 1989.