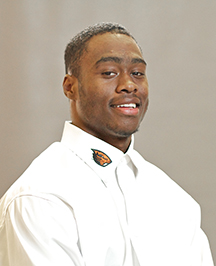 The Tallahassee Quarterback Club Foundation, Inc., is proud to announce that the 2013 Biletnikoff Award recipient is Brandin Cooks of Oregon State University. Cooks emerged as the winner, surpassing the other finalists, Texas A&M’s Mike Evans and Clemson’s Sammy Watkins, in the closest vote in Biletnikoff Award history. The Biletnikoff Award recognizes the outstanding receiver in college football. Any player who catches a pass is eligible for the Award, whether his position is wide receiver, tight end, running back, or slot back. Cooks was selected by the Biletnikoff Award Selection Committee, comprised of 214 distinguished college football commentators, journalists, and former players. Please consult the website at www.biletnikoffaward.com for a list of voters and other timely information.

Foundation Chairman Ritchie Pickron noted, “Given the most narrow margin of victory in Biletnikoff Award history, our voters certainly had a difficult task selecting the winner, Brandin Cooks, from among such great finalists. We congratulate Brandin, as well as Mike Evans and Sammy Watkins, for their outstanding seasons.”

Receiver has become the glamor position and focus in college football, as high-octane passing schemes have become the equalizer and college football team rosters are filled with significant numbers of exceptional athletes who play receiver. The 2013 Biletnikoff Award Watch List, the longest in its history, reflected this talent abundance and the 2013 play of the watch list members merited their designation as the finest receivers in college football.

Brandin, called the “sonic boom”, has had an exceptional junior year. He set the Oregon State record this season with 120 receptions for 1,670 yards and 15 touchdowns, averaging 13.9 yards per catch. He also holds an Oregon State record for career receiving touchdowns at 23. His 120 receptions broke a Pac-12 single season record. His 139.2 yards receiving per game average leads the NCAA as do his overall yards. Brandin joins Oregon State alumnus Mike Hass, who was the 2005 Biletnikoff Award recipient.

The Tallahassee Quarterback Club Foundation, Inc., will present the award-winning Biletnikoff Award trophy, the most beautiful in college sports, and custom-designed ring to Cooks at the 20th annual Biletnikoff Award Banquet, described by Larry Csonka and other keynote speakers as the “best in college sports”, before 550 patrons at the University Center Club at Tallahassee’s Doak Campbell Stadium on Saturday, February 8, 2014. The banquet will be broadcast by ESPN3 for the second consecutive year and, following a tradition of outstanding keynote speakers including Archie Manning, Mike Ditka, Larry Csonka, Bart Starr, Don Shula, and Steve Largent, former dynamic college and NFL coach Dick Vermeil will deliver the keynote address. At the banquet, the Foundation will recognize high school seniors who have overcome significant barriers to achieve at the highest academic and extracurricular levels and who will receive over $800,000 in college scholarships from the Foundation.