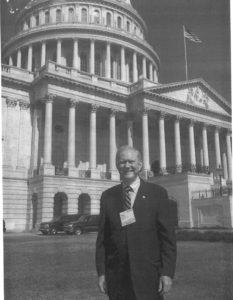 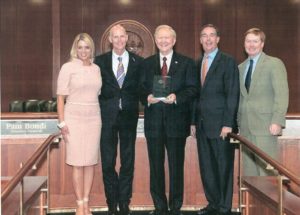 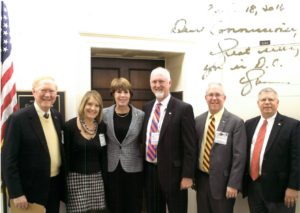 After graduating with high scholastic honors from the University of Florida in 1956, Bill served in the United States Army and was honorably discharged in 1958. He began his insurance career in 1959 with State Farm Insurance Companies in Orlando and in 1961 was elevated to Regional Agency Manager.

Bill was a career public official in Florida serving in the Florida Senate from 1966 through 1972, where he was Chairman of the Legislative Audit Committee, Appropriations Sub-committee, Citrus Committee and Vice Chairman of the Ways and Means Committee.

He was elected to the United States Congress in 1972 from Florida’s Fifth Congressional District. While in Washington, he was a member of the Agriculture and Science and Astronautics Committees and the Energy Subcommittee.

In 1989, Bill joined Rogers-Atkins Insurance as a shareholder partner and currently serves as Chairman of the Board of the successor firm, Rogers, Gunter, Vaughn Insurance, Inc. Bill served on the Board of Directors of the Florida Association of Insurance Agents beginning in 2003 and was elected Chairman of the Board in 2010. In 2012, he received the Association’s highest honor, the Mitchell Stallings Memorial Award.

In 2013, Bill was designated as “A Great Floridian” by Governor Rick Scott and the Florida Cabinet in recognition of his lifelong record of public service.

Bill also received the Stephen C. O’Connell Distinguished Service Award from the University of Florida in recognition of his “outstanding contributions as an extraordinary public servant for our State and Nation”. In recent years, Bill has been very active in the Rotary Club of Tallahassee, the largest civic organization in the Big Bend with over 200 members. He currently serves the Club as President. Additionally, he is Chairman of the Board of the Florida Historic Capitol Museum Foundation and is past president of The Economic Club of Florida.

Bill has been happily married to his wife Kathy for 13 years and has two daughters, two sons, a step daughter and step son and together they have 15 grandchildren.