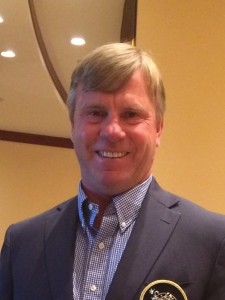 Scott grew up on a row crop farm in Sylvester Georgia, the peanut capital of the world. After being recruited to play on Georgia Southern’s first football team, he transferred to the University of Georgia as a walk-on reserve quarterback while he attained his degree in agricultural economics. He has worked for several of the leading crop protection product companies in the world, and for the last eight years has immersed himself into the biotech and organic agricultural field. He represents Inocucor, a bio-innovations company from Montreal, and owns Eco Pro Ag Products, a company that distributes selected organic growing products to growers in Georgia and Florida. Another way he stays engaged with football is owning Quarterback Science, a quarterback training academy, and has also continued to coach over the years, as time allows, coaching at five different high schools in Tallahassee.  Scott and college-sweetheart Stacey have been married for 26 years and have a son, Ben, at the University of Georgia, and a daughter, Liz, at the University of Tennessee.