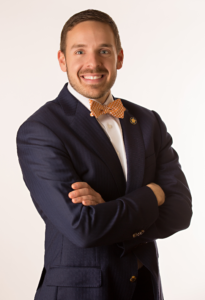 Tyler Huston was born and raised in New York until graduating high school and attending Florida State University in Tallahassee, FL. During his collegiate time, Tyler participated in numerous organizations. He played on the FSU Lacrosse team as well as joining and becoming president of his fraternity, Sigma Lambda Beta. Tyler earned an internship at a financial planning firm before graduating where he finished in the top 1% in the country and took the career full time. After spending 8 years at that firm, Tyler Huston opened his own, Pyxis Advisors, in January 2015.

Personally, Tyler is married to his lovely wife Darcie Morningstar. They reside in Tallahassee, FL with their three furry children, Jade, Dingo and Edgar. Outside of work, Tyler is heavily engaged in the Tallahassee community including:

Darcie and Tyler love traveling nationally and internationally, with a goal being getting outside of the country one time each year, and seeing our country’s great National Parks. Tyler also enjoys extreme sports with his friends having skydived, climbed Mt. Rainier in Washington and Mt. Whitney in California, skiing, racing go karts, attempted to surf and wakeboard, and took a waterfall jumping tour in the Dominican Republic. He’s always looking for the next adventure!