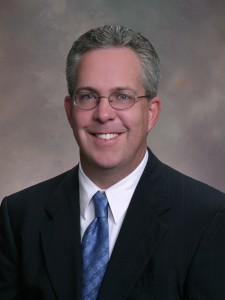 A native of Tallahassee, Florida, Sam Rogers, Jr. graduated from Florida State University in 1982 with a degree in Accounting.  He began his insurance career with United States Fidelity & Guaranty Insurance Company in 1982 as a Surety Bond Underwriter in New Orleans, LA .  He returned to Tallahassee to work with Rogers-Atkins Insurance in 1986 and became a partner and shareholder  in 1998.  In 1994 Sam Rogers assumed the role of Chief Financial Officer and holds the designation of Chartered Property and Casualty Underwriter, (CPCU). In February of 2008 Sam was named the Chief Executive Officer of Rogers, Gunter, Vaughn Insurance, Inc. Sam also holds our firms license as a Surplus Lines Agent.

Rogers community service has included serving on the Board of the Tallahassee Chamber of Commerce and the Tallahassee/Leon County Economic Development Council.  He is past Chairman of the Tallahassee Risk Management Board and Leon County Schools Foundation.  A graduate of Class IV of Leadership Tallahassee,  Rogers served as Chairman of the Independent Insurance Agents of Tallahassee in 1992.   He is currently Chairman-Elect of the Florida Association of Insurance Agents (FAIA) and has served on various FAIA Committee’s including the (FAIA) Automation Committee,  Insurance Programs Committee, FAIA Member Services, Inc. and the Finance Committee. Rogers also is a current member of the Seminole Booster Board and the United Way of the Big Bend Board.